A Life Without Fireflies

by Arturo Got The Shaft 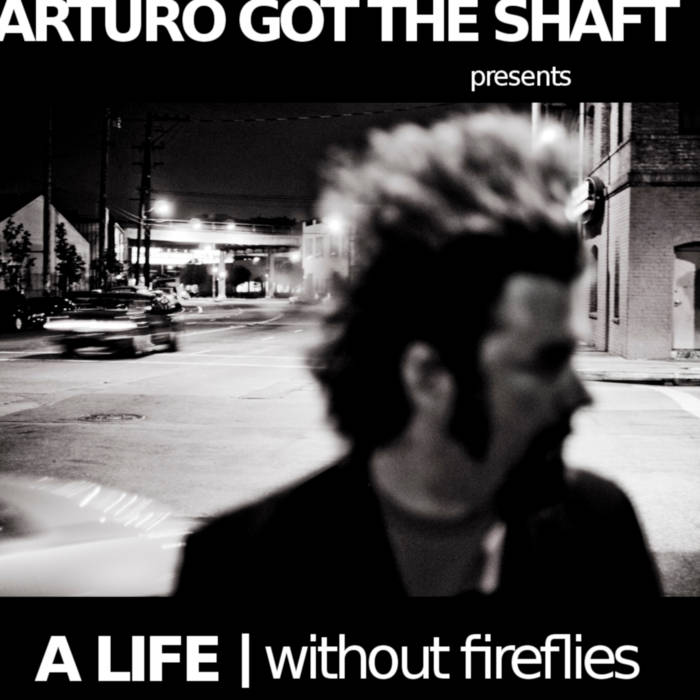 A Life Without Firefies is a record that took two weeks to track, three months to mix and five fucking years to release. Serving as the coda of my education, it was recorded over the spring break of my senior year at Howie's parents and then the week following my graduation in my mom's basement. Howie and I both participated in a singular collective of musicians in central Nebraska and that year he had started a record label out of his dorm room in an effort to get that collective on wax. He had already put out a few records with his band howie&scott and one of my favorite indie rock records of all time (Shacker's Pardon My Pretension But Isn't It Blackbeard's Birthday?). When he indicated Mr. Furious Records would be interested in putting out a full length for Arturo Got The Shaft, I immediately seized on the opportunity to put out a punk rock opera that in my head at least was unprecedented in the history of popular music.

It was the spring of 2003. At that point in the music project I called Arturo Got The Shaft, I'd gone through half a dozen different players and before its demise in 2006 would go through a couple dozen more. It was the last year of Bush's first term before the campaign and already it was a world gone mad. While the world was not at peace, war had seemed inconceivable just a short while ago. When we set in to record, America was balls deep in Afghanistan. We had just taken Baghdad and Bush had told the world in his flight gear that the mission was accomplished. Israel was starting to wall in Gaza. But more disturbing were the hundred little seeds of war that seemed to sprout from the conflicts we had birthed. North Korea going nuclear started to seem inevitable. The sharp-looking mayor of Tehran was promising revolution of the Iranian youth. The Russian Federation's patience was beginning to wear with the former Soviet republic of Georgia. Even in the relative isolation of the Bible Belt, we were all feeling as though we were watching the waters recede as an awful tsunami approached.

The sharp agony of 9/11 was just starting to fade from our lives. We were getting used to the color-coded threat levels and airport security lines. The wiretaps and the waterboarding wouldn't be known for a few more years, but the public taste for the loss of peace and civil liberty was just beginning to sour. The protests were picking up even in Lincoln; fear was giving way to alarm.

We would book shows at empty coffee shops and dives, driving hours to play for minutes and no money. Scraping together bills from our loose but loving network of associates, we were swimming upstream against both environment and atmosphere. The backdrop of Britneys and Backstreets were not yet complete farces, but a few enthusiastic crackpots with acoustic guitars were plenty far from what Nebraska wanted to hear in those times. I wouldn't describe us as soldiers then, fighting the good fight against desperate odds. What we were doing I think would have happened irrespective of any popularity we did or didn't get.

We would play shows because that's just what we were meant to do.

With a dozen or so songs in tow, we went to work to making this single, loud statement against the future we were handed. The boomers were gifting us a dying planet at war packaged with a cotton candy bow and we thought if we could just make one record that described it for what it for what it was, we could turn back the tide before us. With one piece of harmony and poetry, we could buck predestination and forge our own path. We could fight back.

The title for the work - A Life Without Fireflies - came from a magic moment that might never have been. My first college sweetheart came to meet my family in Kansas and was introduced to "lightning bugs" for the first time. In that second when she saw one light up on her finger, it seemed to ignite a new possibility, maybe a new worldview. Her life before that moment and the promise of the life that followed served as a perfect metaphor for what I was trying to say with this record. During that spring in the dawn of the 21st century, we were all living our lives without fireflies and searching desperately for a light that would change the dawns that followed fundamentally.

A few years after the first aborted push to put out "Fireflies" Howie observed in an email that "our reach had exceeded our grasp." In most respects, he was right. I had no business making an opera of any sort and the product of that attempt was telling. A lush wall of instrumentation with dozen-part breakdowns and epic Highlander-esque crescendos was something I had wished desperately was within my capacity.

But for wishing to make it show, I'm not sure it would have endured the five years and three different tries to get the album out. As the world started to crater under the weight of the bullshit that first began to pile in the spring we made this record, these songs just seemed to become more true. Britney Spears would self-detonate, making "Silent Sparkle" seem prescient. A senator literally responsible for the Iraq war would get convicted and make "Open Eyes" a fortune cookie for our country. And Alf would finally return to the screen, giving the mainstream an idea of who Gordon Shumway was.

These tunes were born some time ago but never mattered more than today. It is hope hidden in nonsense; a prophecy disguised as a punchline. We can still have a good time as the world comes crashing down around us. These are serious times indeed, but will only suffer more if we take them too seriously. We need to dance and to sing and to reach beyond our grasp now - this day, this year - more than ever.

This record is that anthem. I hope your life without fireflies ends today.

to be keep up with new music!

Bandcamp Daily  your guide to the world of Bandcamp

outré black metal, with a Victory Over the Sun interview and music from Liturgy and Jute Gyte.